Like a true Gaucho, Geivett did not let his shortcomings take control of his life. When faced with adversity he did not find excuses but instead found ways to succeed and win.

Gaucho alum Bill Geivett recently released his book, Do You Want to Work in Baseball? Inside Baseball Operations, which details his experiences in professional baseball as a player, scout, farm director and front-office executive. In the publication, Geivett’s advice is not only applicable to those who seek a career in sports management, but to anyone competing in any type of job market today as well.

Unfortunately for Geivett, his baseball-playing career would come to a sudden conclusion due to a knee injury in 1988, but this career ending injury still would not stop Geivett from being a part of baseball. Soon after, Geivett would coach for Loyola Marymount University in 1989 and Long Beach State University in 1990.

While coaching for college programs added to his already impressive baseball resume, Geivett’s future would still lie in professional baseball with him eventually becoming a scout and instructor in the Yankees organization in 1991.

From 1994 to 1996, Geivett would be hired as the head farm director for the Montreal Expos. The Expos’ farm system was largely known as one of the best farm systems in baseball during this time due to the tremendous talent in the system that housed big names such as Mark Grudzielanek, Orlando Cabrera, Jose Vidro, Cliff Floyd and Vladimir Guerrero.

During his time as a farm director, in his book, Geivett recalls an experience he had with a particular player, F.P. Santangelo.

Jeff Blair from the Montreal Gazette published an article with an inside major league source from the Expos’ organization, stating, “We don’t feel there is anyone in Ottawa [Montreal’s Triple-A affiliate] who can help our team in Montreal.”

This angered many Ottawa Lynx players, but no more so than it angered Santangelo. After a team meeting, most players had cooled down — but not Santangelo. Santangelo would confront Geivett and insist he is ready to be called up to the big leagues, even though Santangelo was hitting a less than impressive .243 at the time.

After a roster spot opened up on the big league squad due to an injury, Geivett would take a risk on Santangelo, sending him to the big leagues after Santangelo waited seven years in the minors. Stating he went above several people’s heads in the organization to do this in his memoir, Geivett’s career was on the line with this decision.

Nervous, Geivett’s worst fear would come true and Santangelo’s name would be penciled in the lineup the first day he arrived in Montreal. Putting all his money on Santangelo, a person who was more confident in his ability than anyone, Geivett would come out on top.

Santangelo would go on to hit a triple that night and would end up staying in the big leagues for seven years. Geivett stated in his book himself, “It was one of my most emotional experiences in professional baseball watching F.P. slide into third base … F.P. Santangelo taught me the power of confidence.”

After his time in Montreal, Geivett would become the assistant general manager of the Devil Rays in 1997 and would move on to join the Dodgers in 1998 under the same position.

While with the Dodgers, Geivett shared another story about college graduates looking for work in professional baseball. At the Baseball Winter Meetings, an event where baseball GMs meet and discuss potential trades, a couple college graduates approached Geivett and Tommy Lasorda with their resumes trying to get hired on the spot for jobs within the organization. Right then and there, both Geivett and Lasorda broke down the flaws in each approach the men had … to their faces.

When asked about this story when speaking as a special guest for a sports management course here at UCSB, Geivett assured the class to do these three specific things that are reinforced and expanded upon in his book: “Have a specialty. Really know what you’re talking about. Make people aware what you want to do.”

Geivett hopes the release of his book will both help and inspire generations of sports managers and people alike, stating, “I’m hopeful that in years to come somebody that reads the book remembers, ‘Hey I remember reading the book and that guy talked about that,’ and the lesson has been passed on.” 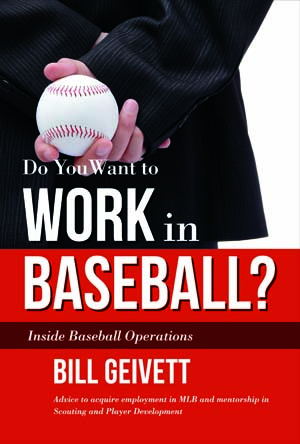